Brooks Robertson will perform in the Argenta Acoustic Music Series at The Joint Theater & Coffeehouse in North Little Rock on November 19, 2020.

Brooks Robertson just doesn’t need much more than two thumbs, eight fingers and six strings on a wooden box to carry his listeners away.

Hailed by prominent exponents of his instrument like Nokie Edwards, Thom Bresh, John Jorgenson and Mason Williams, the young fingerstyle guitarist embodies the creative vision of a postmodern world: It’s the music that counts. Brooks utilizes his superb technical abilities to play bass, rhythm and melody simultaneously and surpass the borders of conventional genres. He merges hauntingly beautiful compositions, country rhythms and jazzy harmonies with funky licks into his very own art form – sometimes delivered with a punch, sometimes with a smile. 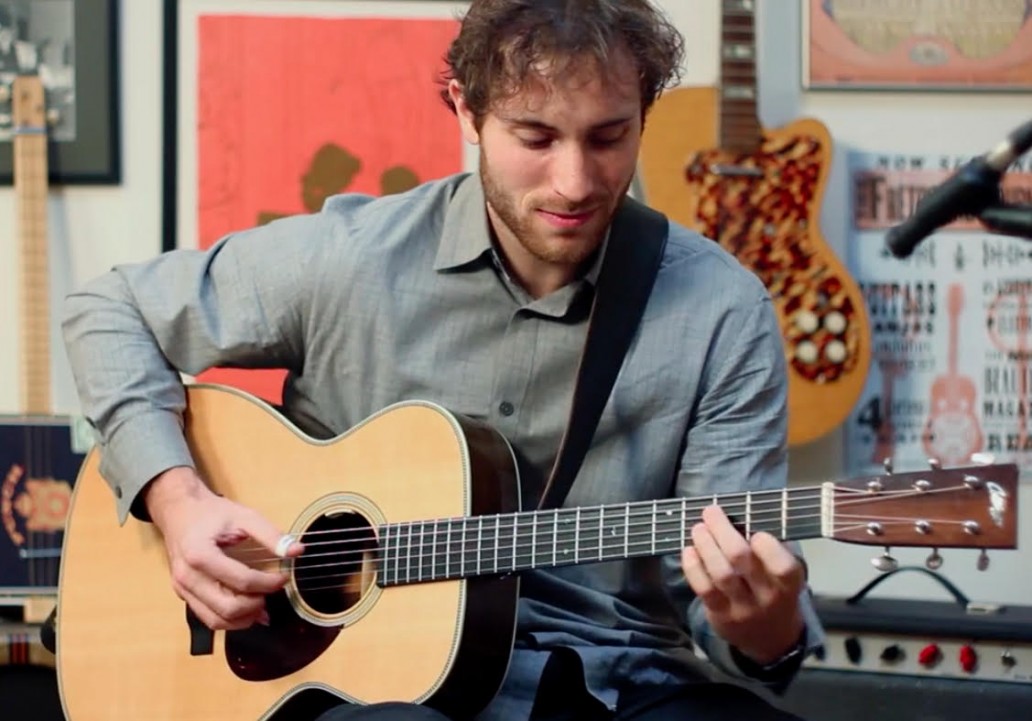 Brooks was born in Eugene, Oregon in 1989. Seeing Buster B. Jones perform at a festival near his home town became a life-changing experience for the kid from the sticks. Just eleven years old, he was immediately inclined to pick up the guitar. Soon, the world renowned fingerstyle virtuoso and instructor dedicated his spare time to introducing his new fan into the secrets of the fretboard, and after six months of lessons the natural talent performed his first show with his mentor.

When Buster B. Jones took him under his wings, Brooks began playing high-profile gigs such as the Nokie Edwards Festival, the NAMM Show in Anaheim, the Montreal Jazz Festival or the Walnut Valley Festival in Winfield among others. By the time he was a teenager he had become the youngest endorsee of Godin Guitars and traveled to several states and foreign countries to perform. Brooks went on to play on Garrison Keillor’s National Public Radio classic “A Prairie Home Companion” in 2004, where he won first place in a talent competition for 12 to 20 year old participants.

In recent years, while still appearing regularly at prestigious events like the Chet Atkins Appreciation Society (CAAS) Convention in Nashville, Brooks focussed on perfecting his craft, soaking up new tunes and styles and techniques as well as blending them into his own groovy and soulful original music. He entered the “Yamaha Six String Theory Guitar Competition”, which drew participants from more than 40 countries all over the world. Brooks was invited to perform in the finals at the Broad Stage in Los Angeles in March 2010. A star-studded jury, including Steve Lukather and Lee Ritenour, eventually chose him as winner of the country category and second place winner overall.

Although he is deeply rooted in the powerful tradition of the genre, founded by the likes of Merle Travis, Jerry Reed, Thom Bresh and Buster B. Jones, Brooks also draws inspiration from the elegant mastery of the legendary Chet Atkins and other phenomenal players. His own compositions and arrangements have even been compared to fingerstyle jazz champions Lenny Breau and Earl Klugh. Now, as energy and maturity come together, this young man is ready to step out of his mentors’ shadows and electrify the world with the sheer acoustic beauty his fingers create, when touching a set of strings.

“The Future of American fingerstyle guitar” – Buster B. Jones
“I’ve always loved playing with Brooks, he’s a joy to be around!” – Tommy Emmanuel CGP

“I was completely knocked out with the acoustic guitar virtuosity of Brooks Robertson! Brooks has a very original touch and sound plus monster chops. He’s always making great music with his guitar. I’m sure Brooks will be sharing his music with the entire world and have an incredible career.” – Lee Ritenour

“Brooks Robertson plays like the house is on fire.”  – Thom Bresh

“All guitar players are like Frankensteins. Their music is made out of bits and pieces of other players. In Brooks’ case, he’s a son of a Frankenchops, the well known monster picker Buster B. Jones. Buster and Brooks are both so scary … the legend continues.” – Mason Williams

“Brooks Robertson has one of the very best techniques in fingerstyle guitar. You can hear the influences of Buster B. Jones, Jerry Reed, and all the great fingerpickers past … and he’s writing some fabulous new material. An amazing guitar player who’s showing the rest of us how it’s done! Nobody whops Brooks Robertson!”  – Richard Smith
“Brooks Robertson is a superb and exciting guitarist. I love his playing!”  – Pat Bergeson