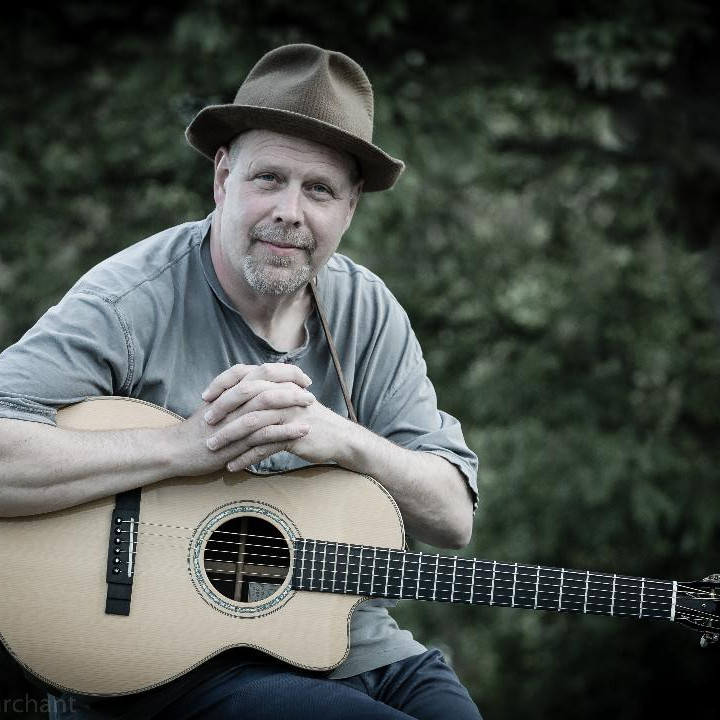 Eric’s involvement with music started before he ever played the guitar. As a youngster, he was a first soprano in the Philadelphia Boys’ Choir. His mom sang in nightclubs and played piano. “She was French and would burlesque around the house imitating Edith Piaf and singing French folk songs,” Eric muses.

Eric’s oldest brother was influential early on and seeded his interests in music. “While my brother was in Vietnam, I had access to his record collection – the jazz greats like Miles Davis, John Coltrane, and Dave Brubeck.” It was after his brother returned and started to take guitar lessons, that Eric began to play. “I would sneak into his room, pick up his guitar, and figure out the tabs on my own. That was my introduction to Mississippi John Hurt, Reverend Gary Davis, Doc Watson and Pete Seeger.”

In 1983 Eric won third place at the prestigious National Fingerpicking Championship in Winfield, Kansas. Inspired by his competitors, he came back the next year along with some of his original compositions and won first place. At age 25, he was the youngest winner at the time. The win gave a boost to his burgeoning career as a fingerstyle guitarist, which launched him into the national, and later international, spotlight. Soon after, Eric released his first recording, Strike, which is an original suite for guitar, flute and bass. Then in 1988, Eric moved from Philadelphia to the Midwest and started teaching at the renowned Old Town School of Folk Music in Chicago where he remained for 25 years teaching fingerstyle guitar classes and private lessons.

Although Eric is best known as a fingerstyle guitarist, he is also a talented songwriter.

Eric’s recording, Making Models, released by Waterdog Records in Chicago, is a reflection of his songwriting talents. It also demonstrates his bent for incorporating eclectic instrumentation – steel drums and accordion – with guitar and vocals.

In 1997 after performing the opening set at Freight and Salvage in Berkeley for legendary fingerstyle guitarists John Renbourn and Duck Baker, Duck offered to submit

Eric’s music to the guitarist Peter Finger, who is the owner of Acoustic Music Records in Germany. Duck’s recommendation worked, and Eric’s next three recordings were released by the label: Black Key Blues, Kind Heroes, and New Tradition.

Black Key Blues is considered by many as one of the finest solo fingerstyle guitar albums ever produced. It is a collection of original tunes and interpretations of jazz and traditional American music. Kind Heroes and New Tradition contain these same trademarks and additionally include some of Eric’s original songs. New Tradition features duets with some of Chicago’s finest musicians. The title of the recording reflects Eric’s contemporary take on “pop songs of the 1800’s”.

Eric’s recording REVision is an homage to the great Rev. Gary Davis. According to Pat Donahue, “(Eric) has internalized Davis’ style to the point where he can improvise within that style and still have it come out his own.”

Eric has performed and taught globally in festivals and concert halls including:

Eric has shared the bill with performers such as: