Shane Hennessy will play at The Joint Theater in North Little Rock on August 18, 2022, as part of the Argenta Acoustic Music Series.
Irish virtuoso guitarist Shane Hennessy has established himself as one of the leading guitarists on the world stage, known widely for his fingerstyle, flatpicking, and percussive guitar-playing approaches. His energetic live performances and his cinematically-vivid compositions tie in influences from Bach to Beyoncé – and everything in between! With a unique style of solo guitar playing that encompasses the range of a whole band – covering drums, bass, rhythm and lead lines – Shane builds a complete sonic world entirely on his own. 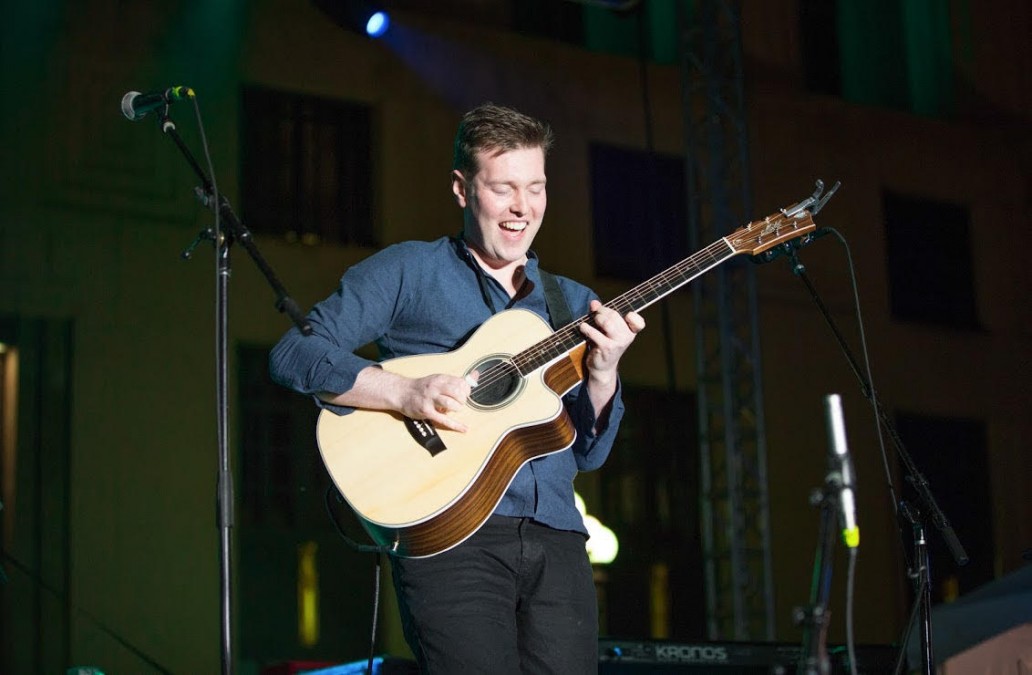 Billed as “one of the most exciting live performers of his generation, with an ability to move between styles and genres with ease” by Irish Music Magazine, audiences can never be too sure what will come next during the exciting mix of jazz, blues, country, soul, traditional Irish music, and world music he offers. With the addition of some smooth vocals, genre-hopping improvisations, and well-arranged covers, it makes sense why music legend super-producer Nile Rodgers (CHIC) thinks that “his style is killer, it’s really cool stuff”, and why guitar legend Tommy Emmanuel says that Shane “is one of the most engaging musicians in the world today”.
Over the course of a performance, Hennessy brings the audience from elatory highs to the depths of reflection, delivering stories, anecdotes, and off-the-cuff remarks with the same passion he holds for the music he performs. He says himself that it is hard to describe in words what he does on stage without experiencing it in person, but it becomes clear upon witnessing his performance why his tour schedule is so hectic. In 2019 alone, he will visit much of mainland Europe, Russia, China, and the United States, the pinnacle of this world tour being a solo set at the prestigious MerleFest in North Carolina, widely recognised as the mecca of Americana and Roots music in the USA.
A musician from a young age, he credits his background in Irish traditional music as the base on which he has built his genre-defying musical explorations. Initially a concertina player under the tuition of the renowned Mícheál Ó Raghallaigh, Hennessy first turned to the guitar inspired by the music of James Taylor. Becoming more interested in songwriting and in music in general, it was when he discovered the styles of Tommy Emmanuel and Chet Atkins that his interest in solo performance blossomed. From that point on he has toured the world, with thousands of shows under his belt, and a proven track record as a performer, songwriter, arranger, accompanist, and session musician.
A highlight of his career to date has been a sold-out a solo show in The National Concert Hall in Dublin, Ireland, for the release of his latest CD ‘Marrakech’. Another milestone in 2018 was when Shane worked with Bill Whelan, Grammy-award winning composer of Riverdance, on a piece of music commissioned for guitar, piano, and string quartet. He has also given numerous lectures and guitar workshops all over the world for guitarists and musicians eager to learn more about his unique musical approach. Still, given his successes to date, he is always eager to keep pushing the boundaries of what he can do on one guitar. To quote RTÉ Radio host Marty Whelan: “There was part of me that didn’t really believe that he could do what he does on one guitar until he came into the studio, sat down in front of me, and played. I thought there had to be loops, or extra tracks, or recording tricks, and there was none of that – my jaw dropped! What a talent!”

​Shane is currently on a whirlwind 2019 world tour, with stops in the USA, Europe, Russia, China, Australia, and more. Upon returning to Ireland in November 2019 he will be recording his third studio album, as well as beginning to film a teaching DVD & online course.