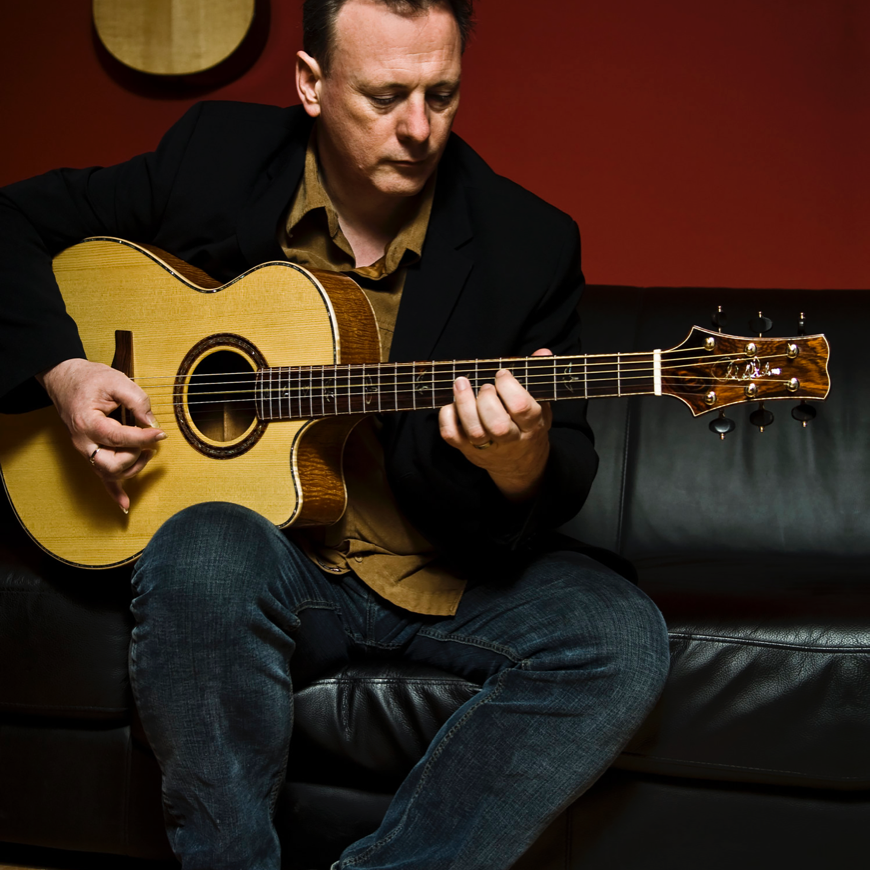 Hailed by John Renbourn as ‘the best Celtic guitarist in the world’ Tony McManus has been listed as one of the 50 transcendent guitarists of all time by Guitar Player Magazine. Conjuring a unique but universal language from that most ubiquitous of instruments, the acoustic guitar, Tony McManus has both extended and transcended the parameters of contemporary Celtic music. Ranked by peers and predecessors alike alongside the guitar world’s all-time greats, his fiendishly dexterous, dazzlingly original playing draws on traditions from the entire Celtic diaspora – Scotland, Ireland, Brittany, Galicia, Asturias, Cape Breton, Quebec – along with still further-ranging flavours, such as jazz and east European music. Long applauded for his uncanny ability to transpose the delicate, complex ornamentation characteristic of traditional bagpipe or fiddle tunes – even the phrasing of a Gaelic song – onto his own six strings, McManus is increasingly being acknowledged also as a pioneering figure in bridging the realms of Celtic music and other guitar genres.

Early on, having heard his session work on several albums, Nashville based Compass Records released “Ceol More” in North America to universally ecstatic reviews. Critics hailed the focussed, spell-binding nature of the music, from the plaintive Jewish hymn “Shalom Aleichem” to the ingenious arrangement of the Charles Mingus tune “Goodbye Pork Pie Hat”. Having been nominated as Musician of the Year by both the BBC Folk Awards and The Scottish Traditional Music awards, in 2002 “Ceol More” hit the Critic’s Album of the year list in Acoustic Guitar magazine and named “Live Ireland Awards” Album of the Year.

Since then, Tony’s music has come to define a new role for the guitar in Celtic music. He has come to represent Celtic music in the guitar world, making regular appearances at guitar specific events where just a few years ago jigs and reels would be unheard of. His solo work aside, McManus is also a wonderful accompanist, and he has worked with (among many others) Dougie McLean, Phil Cunningham, Mairi MacInnes, Liam O’Flynn, Martin Simpson, Kevin Burke, Alison Brown, Martyn Bennett, Natalie MacMaster, Patrick and Jacky Molard, Mairead ní Mhoanaigh and Dermot Byrne.

Tony is now also invited annually to the Chet Atkins Festival in Nashville, has appeared at Guitar Festivals in Soave and Pescantina, Italy; Frankston, Australia; Issoudun, France; Kirkmichael, Scotland; Bath and Kent, England; Bochum and Osnabruck, Germany and has taught at five of Steve Kaufman’s Acoustic Kamps in Maryville, Tennessee. He recently appeared at the famous Ryman Auditorium in Nashville in the “All Star Guitar Night” featuring Steve Morse, Bryan Sutton, Muriel Anderson, Béla Fleck and Victor Wooten and headlined by the legendary Les Paul. He has performed and taught at the Ellnora Guitar Festival in one of Illinois’s most prestigious venues, the Krannert Center, with the likes of Pat Metheny, Kaki King, Molly Tuttle, and Steve Dawson. He is a signature artist for PRS Guitars in Maryland, and has performed at their venue with Carlos Santana, among others, and done PR tours for different guitar companies such as Paul Reed Smith and Greenfield Guitars both here and abroad, even to Japan.

Tommy Emmanuel says of Tony “This music is beyond beautiful, its. PERFECT!” and Dick Gaughan says “I have no superlatives to do this justice.”