Jazz at The Joint: Jimmy Bruno

Jimmy Bruno, born July 22, 1953 in Philadelphia, Pennsylvania, is a master jazz guitarist and jazz educator. One of the most critically acclaimed jazz guitarists performing today, Jimmy Bruno came to prominence as a jazz musician in the 1990’s, after a successful twenty-year career as a sought-after commercial guitarist and session musician. 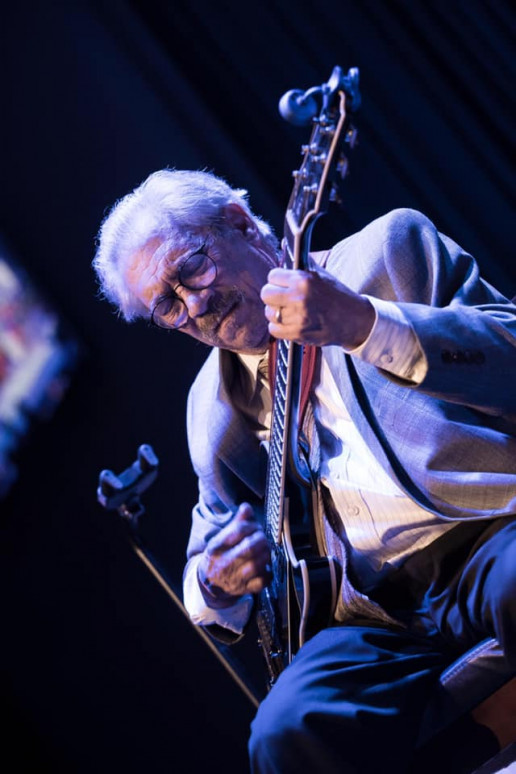 “Get on the bus; we leave tonight.”
Those were the words that began Jimmy Bruno’s professional career as a guitarist. Most of the other guitarists auditioning for Buddy Rich’s band that day in 1973 were getting drumsticks thrown at them, Buddy’s not-so-subtle way of showing disapproval. But not 19 year-old Jimmy; he got the gig. A Philadelphia native, he was born into a family no strangers to the music world. Jimmy’s father played guitar on the 1959 hit “Guitar Boogie Shuffle” with Frank Virtue. Jimmy’s mom was a gifted singer. Living in such a musical household, playing guitar eight to ten hours a day was normal for this south Philly kid. He studied jazz improvisation with local Philly bass legend Al Stauffer and to develop technique, taught himself to play the rigorous and exacting classical violin etudes of Wohlfahrt and Paganini. Although he briefly considered leveraging his perfect SAT scores into medical school, a summer guitar gig in Wildwood NJ changed the direction of Jimmy’s life forever, putting him into the path of Buddy Rich.

“Jazz guitarists just don’t come any better. Jimmy Bruno combines a dazzling virtuoso technique with drive and swing to produce, in concert and on record, superb and inspired lyrical improvisations.”
—Maurice J. Summerfield, noted British author of the definitive and highly regarded The Jazz Guitar Guide and The Classical Guitar Guide.
After a whirlwind round-the-world tour as the youngest member of the Buddy Rich Orchestra, he went on to play guitar in orchestras for Frank Sinatra, Anthony Newley, Doc Severinsen, Lena Horne, and many more music icons. Additionally he spent many years as an LA session musician working with Tommy Tedesco. But his first love was always jazz, and by the time he was in his mid-thirties he was ready to come out of the background and into the spotlight. The first step was moving back East.

“I was making good money, but I wasn’t playing any jazz. So I got disgusted, saved some money, moved back to Philly and just decided that I’m only gonna play jazz. I’m not going to play weddings. I’m not gonna take any bad gigs, and if I had to I would take a day gig for a while, and I did. I tended bar for two years. And it paid off. I wish somebody in school would have told me that.”
—Jimmy Bruno
Paying his dues by playing blistering guitar in the small clubs and venues around his beloved Philadelphia during the 1980’s, his reputation as one of the hottest guitar players grew. In 1992 he was discovered by Carl Jefferson, the founder of Concord Records and landed a multi-CD recording deal. Since then, Jimmy has recorded over 13 critically acclaimed CDs, including “Sleight of Hand,” “Like That,” and “Polarity” (with Joe Beck). His most recent CD “Maplewood Avenue” (Affiliated Artists Records) has been described as having “…a ‘classic’ feel to it… like a famous album we somehow hadn’t discovered yet,” and was honored by being selected as one of the top CD’s of 2008 by Downbeat magazine.

“You couldn’t say Jimmy Bruno is grand or great… he’s all those. He is tops!”
—Hank Garland
In recognition of his prodigious talents, Jimmy has been invited to play at major music festivals around the world, including the JVC, Berks, Vail, and Concord Jazz Festivals, and a whirlwind stop at the Pescara Jazz Festival in Pescara, Italy. Over the years, he has shared the stage with a who’s who of legendary and highly regarded musicians: Joe Beck, Bobby Watson, Jack Wilkins, Tal Farlow (at Farlow’s 75th Birthday Concert), Howard Alden, Christian McBride, Curt Elling and many more. When a tribute concert was planned for Barney Kessel, Jimmy was one of an invited group of 30 guitarists chosen to perform and was honored to open the tribute (with Howard Alden). He has also participated in tributes to jazz giants Kenny Burrell, Herb Ellis and Johnny Smith.

In May of 2007, Jimmy and Affiliated Artists opened the Jimmy Bruno Guitar Institute (JBGI). With his unique insight into jazz and jazz guitar, Jimmy brought his method and “no nonsense” approach to jazz improvisation to eager guitar students around the world. Five months later, his long-standing reputation as a jazz educator was further enhanced when he was invited to address and perform at the 4-day Jazz Improv Convention in New York City.

Downbeat magazine — in celebration of their 75th Anniversary in 2009 — named Jimmy as one of the top 75 guitarists of all time!

In 2011, Jimmy created his own independent online jazz guitar school — the Jimmy Bruno Guitar Workshop — with all-new, improved lesson content and delivery systems to better serve his huge jazz guitar student base around the world. Having spent three years with the Institute, improving upon and tweaking his teaching method thanks to the direct feedback from his students, he has once again revolutionized the way students can learn guitar on the Internet.